At Keyrus, we have the opportunity to engage in “offline tasks.” An offline task allows you to work on a project that incorporates skills or technologies you don’t use in your day to day work. As a consultant, I had never done anything related to data science before. I wanted to see what the buzz was about, and how I could increase my skill set with some new tools.

I decided I would extract Twitter feed data about any business intelligence or ETL tool and perform a sentiment analysis on that data. The benefits were twofold: I could dabble with data science concepts, and also gain some insight into how some of the tools compare to one another on Twitter.

Roughly 500 million tweets are posted by people every day, which translates to a rate of 6,000 tweets per second. Some companies utilize this as a source of customer thoughts and opinions, but it mostly remains an untapped mine of insight. This is where a sentiment analysis comes into play. It can help businesses answer questions like:

Answering these types of questions can produce serious value for a business. The solution here is to extract all of these tweets, analyze them to find those sentiments, and then have a way to visually explore them and isolate the insights.

The purpose of this project was to create a parameterizable process that could extract Twitter feed data about any business intelligence or ETL tool and perform sentiment analysis on that data. We could then use this analysis to study and react to the sentiment of Twitter users who are tweeting about these data tools.

The tools and services that were used in this project are: 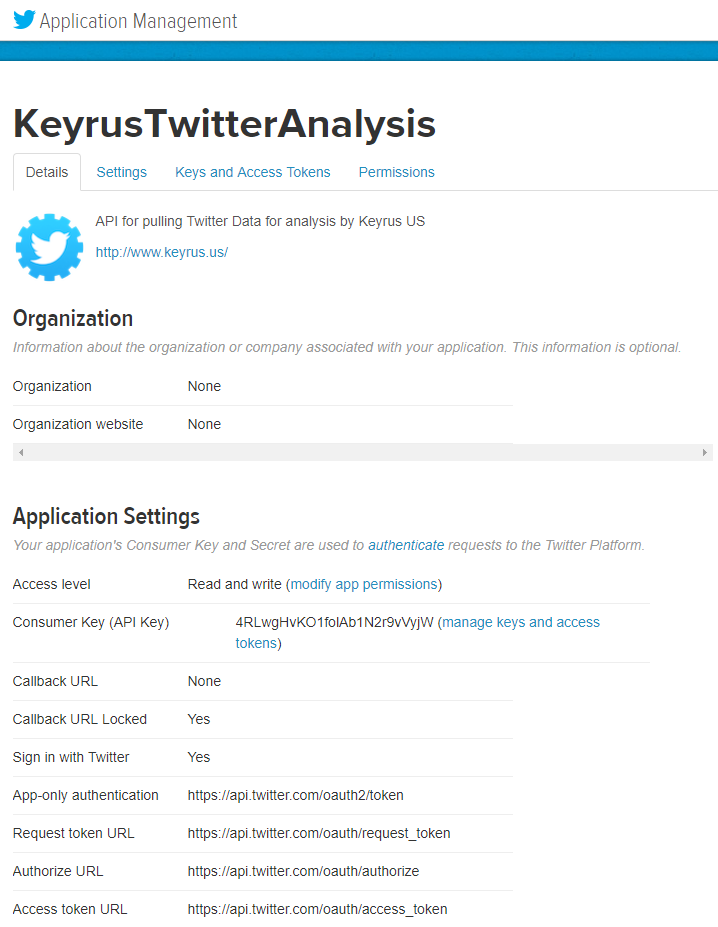 After creating the app, take note of the Consumer Key and Consumer Secret under “Application Settings” in the “Keys and Access Tokens Tab.” 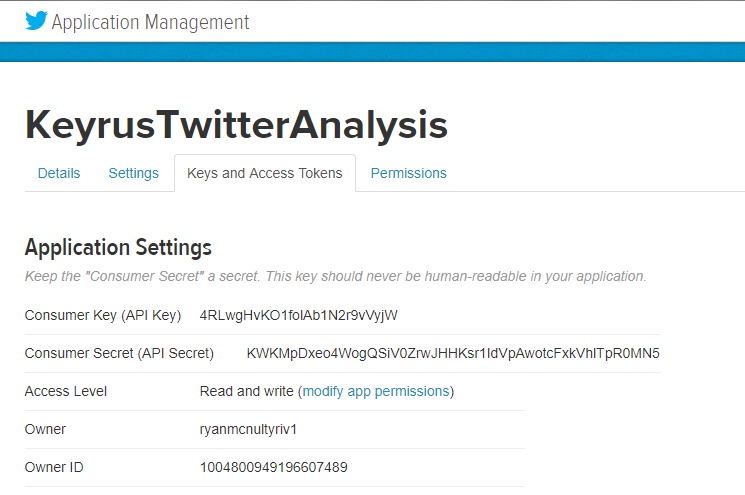 The Workflow/Analytic App created for this project is called “Twitter_Sentiment_Analysis_Data_Tools.”

The first Alteryx component of this workflow is the Twitter Search Tool (Note: this tool may not come pre-installed with Alteryx. Add it from the Alteryx Gallery). 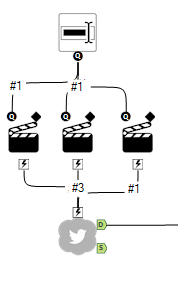 In the “Configuration” tab of the Twitter Search Tool, enter the Consumer Key and Consumer Secret as well as the Application Name chosen when the API was created. To edit the search parameters of the tool, click the “Search” tab.

When this Alteryx Workflow is run as an Analytic App, the user will be prompted for what business intelligence or ETL tool they would like to search Twitter for. The app can be run as Analytic App by selecting the “Magic Wand” icon next to the standard green arrow execute button in the top menu.

To prepare the data for NLP (Natural Language Processing) and sentiment analysis, you need to clean the data extracted by the Twitter Search tool. 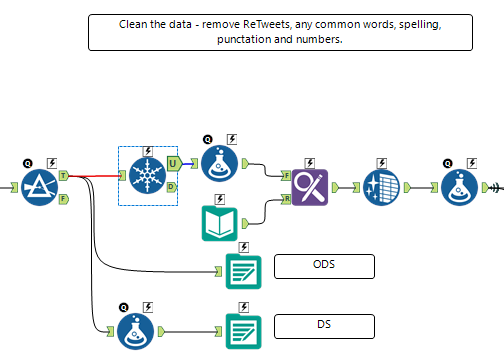 The steps above filter out Retweets, any non-unique tweets, and removes any common English words from the TweetBody field.

The sentiment analysis for this project is done using the R library “tidytext” (not a library that comes pre-installed with Alteryx’s Predictive R toolset). The code gets the sentiment lexicons called “afinn,” “nrc,” and “bing.”

In order to use these lexicons, that data had to be converted to a single row per word (unigrams) using the Text to Columns tool.

The R code used in this project can be seen below as it is entered into the Alteryx R developer tool. The code imports the necessary libraries, the inputs from the Alteryx workflow, and the sentiment lexicons.

Then the code joins the lexicons onto the inputted Twitter data so that each word-score in the lexicons library gets attached to the feed data. Each of these joined tables are outputted to the Alteryx Workflow. 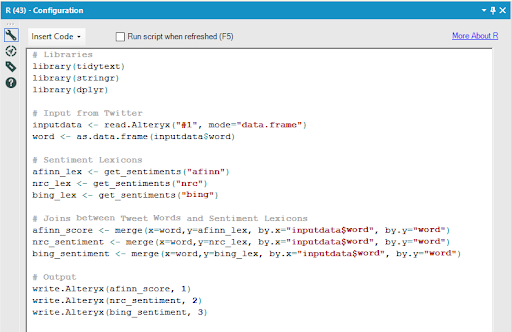 The last steps in this part of the workflow aggregate the scores back up to the per Tweet level of granularity and then those aggregated tables are joined back onto the main Twitter data table. Two dimensional tables for the Afinn lexicon and Bing lexicon Twitter tables are created in this stage as well.

The final part of the Alteryx Workflow is joining the main Twitter data table to the Afinn sentiment score table and the Bing Score table, and then preparing that data to flow in the fact table in the SQL Server.

The majority of the tools in this part of the workflow deal with converting the Twitter TweetPostedTime to a readable date format, as the Twitter API outputs a string format for that field.

Finally, the data is sent to the local database “DB_Twitter_Sentiment,” hosted on the local machine for this project.

For this project, a local SQL Server instance ((LocalDb)\TwitterSentiment) was set up with a local database (DB_Twitter_Sentiment). The schemas for this database are: ods, ds, stg, dwh. The tables created and populated by the Alteryx workflow are:

The purpose of this dashboard is to provide an overall analysis of the Sentiment of the Data tool specified by the filter in the top bar.

The three KPI’s on the left display the overall Affin Sentiment Score, the Bing Sentiment score, and the number of tweets that are being considered.

The packed bubble chart contains the sentiment words used in the tweets – their size correlates to how often they were used in relation to that data tool, while coloring is based on the sentiment scores. (Note: Time period filter does not affect this graphic).

The Sentiment by Day chart at the bottom displays the average Affin sentiment by day and is colored by the average Bing sentiment score. (Note: Two days can have similar Affin scores, but are colored differently because the Bing score may have rated a word differently, since it is on a binary scale). 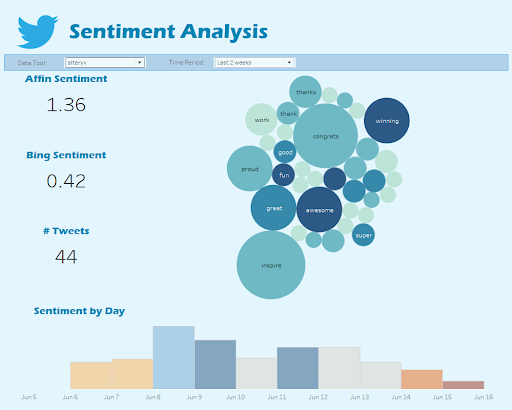 The purpose of the Sentiment Comparison Dashboard is to compare two of the data tools that have had data pulled by the Alteryx Workflow. In the dashboard below, Tableau and Microsoft’s PowerBI are compared via the sentiment scores.

The KPI’s (the same from the Sentiment Analysis Dashboard) allow a quick glance to see how each BI software is performing on Twitter.

The tables at the bottom display the average Affin and Bing scores per day, allowing for some quick trend analysis for each tool. (Note: the time period for these charts is selected from the filter on the Sentiment Analysis Dashboard). 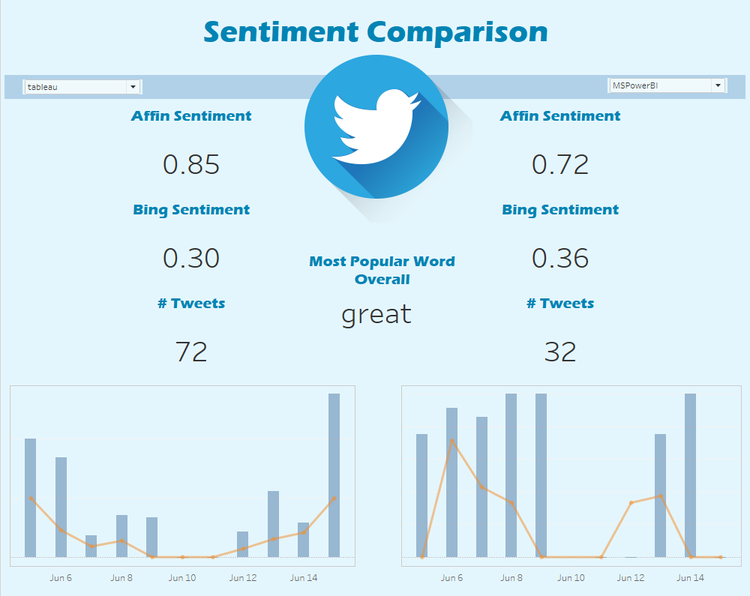 The Tableau visualizations above allow for rapid insights into these BI tools. We can see that Tableau’s efforts to engage with customers on Twitter have a high correlation with a more positive sentiment of their product.

The Keyrus team is excited to announce that we’ve been named one of the top 1000 companies on Clutch’s platform in 2022! This is the second year that Keyrus has been recognized by Clutch as a top company and B2B leader.

The cloud offers new opportunities to save you time and money, allowing you to shift focus from maintaining growing servers and upgrading infrastructure to making your data work for you and the success of your business. Watch the webinar and Q&A to learn how AWS, Tableau, and Keyrus worked together to help Red Ventures migrate to a powerful cloud BI tool that created new pathways for success and a modern data culture.

Want to optimize your visual analytics in Salesforce? You need the right tools. Tableau Embedded Analytics can be used to help you build and visualize reports in Salesforce.

C&S Wholesale Grocers worked with Keyrus and Alteryx to implement an analytics center of excellence to help them efficiently and effectively achieve business objectives, maximize return on investment (ROI), and standardize best practices.

Keyrus partnered with a consulting firm to build an in-house cloud security solution that would automate their verification processes and keep their information safe.